Have you been looking for an efficient and functional VW Beetle?

If so, you've probably noticed that perfect specimens have become extremely rare. Moreover, a closer look at those not exactly cheap offers usually leads to the conclusion that - contrary to what the seller says - it is only a patchwork. It is no coincidence that thick layers of paint, filler and underbody protection serve to hide this sad reality.

Gone are the days where you could find Beetles, in good condition with two years of overhaul, in almost every newspaper under the heading "Used VW cars". Today, if you are seriously motivated, you could build your car, and in this regard Hoffmann Speedster can help you by providing you a wide range of spare parts. After a few hours of work you will see yourself how crazy this is!

The floor panel assembly of a Beetle is its chassis. Logically, the chassis number can also be found here. Thus the documents of a Beetle, which are issued for a certain chassis number, belong to the floor assembly and not to the rest of the Beetle.

This has the following consequences: f you screw another chassis under your Beetle, it is no longer yours from a legal point of view. From the very beginning the documents of the "new" chassis take the place of the old ones, with all the advantages and disadvantages that may arise. The only exception that can be made is when using a brand new chassis.

Some registration authorities are also willing to engage in "horse-trading". In fact, if a certification is provided stating that the floor assembly has been replaced by a used part due to rust and the old chassis has been scrapped in accordance with the law, the original chassis number of the used floor panel is legibly crossed out and the number of the old chassis is stamped in underneath. At this point, the old chassis is permanently unusable and it cannot be reconditioned.

Perhaps your registration document already contains some technical changes for which you have had to fight for a long time or for which you have paid a lot of money. Especially in older vehicle registration documents, there are often entries that would no longer be included today. Even in this case you should make a point of keeping your own chassis under all circumstances.

Equally good is the possibility to buy the chassis of an old car with interesting entries, to restore it and use it for your own car. Sometimes such an opportunity can be found in advertisements in specialist magazines.

However, it is not always convenient to own a vehicle of a more recent year of construction. The law offers the possibility to freely choose the year of construction through the exchange of chassis. For example, if you value red turn signals more, order a chassis that was first registered before 1.1.1970; if you want to avoid the annual emission test in the future, you should choose a vehicle registered before 1.7.1969, etc. This opens up particularly interesting prospects for 1303 drivers, among others, who do not wish to have a panoramic windscreen, and prefer to do without the model's first registration date. In fact, with the floor assembly of an early 1302, you have the option to build the model 1303 registered before 1.10.71, although the 1303 was only launched in August 1972. 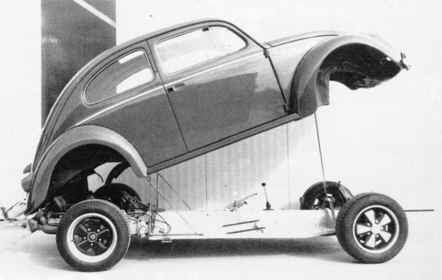 4. A chassis according to your personal needs

By choosing a specific chassis, you can also decisively influence the driving behaviour of your Beetle. Extreme tuning enthusiasts prefer the so-called automatic chassis. This has a so-called rear axle arm, as known from the 1302/03 models, in combination with a "short front end". This means that the front axle has a torsion bar suspension, and has no suspension struts as in the case of the 1302 and 1303, which means that it can be adapted to all models except those of the 02/03 series.

Sounds complicated, but it is quite simple. With an automatic floor panel you can optimise the road holding of all Beetles with a short front end, from the VW Pretzel 48 Beetle to the Mexico 86 Beetle.

Obviously, there must be a small inconvenience somewhere. The automatic Beetles - only they had the coveted chassis - were produced in relatively small numbers from the end of 67 to 77. In addition there is the problem that in the floor panels produced from 67-70 a guide for the clutch cable is missing and therefore they have to be modified accordingly.

In case of supply gaps, it is also possible to convert the chassis of the Mexico Beetles into longitudinal arms or to fit 1302/1303 floors with the frame heads of the short front end. In this way a new "automatic chassis" is created.

Advantage: The clutch cable guide does not have to be retrofitted. The fact that the initial registration data for these chassis is after 1.10.71 is not a problem if you want to install a powerful engine (such as Type 4 or GTI) for which a Beetle exhaust emission certificate exists.

5. In the end you get what you really need

Even if it just sounded that way, the automatic chassis is not the only thing that makes you happy. People who "go for" an extreme rear wheel lock for aesthetic reasons, or some acceleration sports enthusiasts, prefer the good old swing axle. To them, the massive drive shafts of the swing axle seem to inspire much more confidence. And if you own a 02 or 03, a classic automatic chassis is of no use at all.